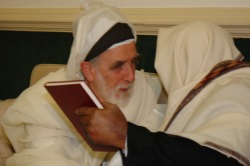 Himmah is aspiration, but a particular aspiration as all men and women have aspiration, even if it is to destroy themselves.

This aspiration, called Himmah in Arabic, is a desire that relates to Allah, subhanahu wa ta’ala, and his Rasul, sallallahu alayhi wa salim. It is the purification of the desires that all men have from all that is other than Allah.

Himmah is inextricably linked to movement. Allah’s creation is dynamic; it is always in motion; everything exists by energy, even the solid mountains and down to the smallest atom and its constituents. Himmah is what connects the intelligent being in the universe, which is man, to the movement of the cosmos as designed and decreed by its Creator. As we said all men have aspiration and likewise all men are in motion but Allah makes a distinction when talking about mankind in surat al-Insan;

“We guided him on the Way, whether he is thankful or unthankful.”

The guidance on the Way here, is not advice but instruction and the instruction of Allah is from His Will, subhanahu wa ta’ala, so it will happen. For us the difference is how we react to what Allah brings and this depends on whether Allah has created us Mumin or Kafir; whether we pass through this life, the ‘Sabil’, in acknowledgement or denial. Of course the Mumin will sometimes rebel and the Kafir will sometimes obey, but these occasions are not essential to their characters. This ‘guidance’ is the movement of man through his life. Himmah is the desire to remove any obstacle from the behaviour of the traveller which is incompatible with what Allah wants and by extension to act according to what He, subhanahu wa ta’ala, likes. It goes beyond obedience to our Master although built upon it; it transmutes from going against ourselves into wanting what Allah wants. It is leaving what we want and making His desire our desire. It is a Hijrah from ourselves to our Rabb. It is the recognition that Allah is doing what He wants in all situations and at all times and wanting to submit to this dynamic.

Himmah relates to the heart and man is ruled by his heart. The pure heart is pure because it is void of self and filled by what Allah wants in it. That is His glorification, subhanahu wa ta’ala, and the praise of what He has created, by praising His Rasul, sallallahu alayhi wa salim. If the heart is open to whispering and hawa’, the desires and passions of the self, the heart loses control through rebellion of its subjects, the senses, and a person becomes trapped in his own body and further by a materialistic, sensual society. Himmah rallies the forces of the heart and spirit and it is a power that cannot be withstood. The only thing that can defeat Himmah is a lack of it.

Shaytan knows this and therefore hovers around the human heart whispering his misleading insinuations to incite us to act contrary to Allah’s commands. This is his job and he was created by Allah, therefore he is serving Allah’s purpose. Himmah ignores the whisperer as it ignores that part of the self that turns against Allah in following what is whispered to it. Remember that Shaytan is not some horrific monster, he is the one you tend to ignore because he is always there; you know him well. It is by the existence of Shaytan and the low self that Allah tests his slaves to see who will be thrown into the Fire and who will be raised to the high assemblies. Virtue is by holding to the good and avoiding the bad. Himmah makes this easy. It is like going into a fight without any concerns because you know you will win. Himmah in the young man almost desires conflict so that he can prove that he will not be turned from Allah.

Himmah is not a concept; indeed there are no concepts in Islam. There is Haqq and there is Batil, and we know what Allah, subhanahu wa ta’ala, says about this;

“And say; Truth has come and falsehood has vanished. Falsehood is always bound to vanish.”

This life is the journey of the spirit which resides in the heart and body; a journey from its Lord to its eternal resting place after waiting in the grave. A high Himmah corresponds to the one who crosses the Sirat after death like lightning, indeed everything in our lives is who we are, have been and always will be, that is why our manifestation is this world is so critical. It is the demonstration of Allah’s Names and Attributes, whether His Mercy, Majesty or both. We are signs among His signs. Himmah is wanting to be one of those loved by Allah and His Rasul, to be one of the Sabiqun, the Rijalullah, the Ikhwan of the Rasul. To the Ashabul Himmah this world holds no value; it is to them like the gift from a beloved, where the beloved is everything and the gift only has value because it comes from the beloved. The gift is therefore cherished far more than those who love the gift itself.

The road is loved because it leads to the One we wish to be with. The company of the People is loved because they remind us of Allah. This is an important point because the initial Himmah for travel and knowledge of the path is lost in thinking that the path is it; that the means is the end. This impedes and even stops the movement to the intended goal. It is like being enamoured of a particular place on the way, so that you stay and do not continue on your journey. Shaykh Muhammad ibn al-Habib says, ‘do not be satisfied with less than the Ever-Continuing, al-Baqi’. He also says, may Allah have mercy on him, that Himmah is the mount, the riding beast, on that road. It will take us to our goal; the place where report and imagination end; the destination where we see for ourselves because we are there.

Shaykh al-Akbar, the greatest Shaykh, Muhyiddin ibn al-Arabi, said, ‘if you set out you will arrive.’

What we are talking about is certainty. All men will come to certainty, because we all die. The certainty we are talking about, the path to it, Himmah for it, is that quality of certainty of the Next Life in this life. So there is no shock for the one whose Himmah completed the journey to Allah by his desire before Allah made it obligatory through his death. All this is by the will and power of Allah as nothing moves, enters or exits without his permission.

As in all good things the best in the matter of Himmah is the Rasulullah, sallallahu alayhi wa sallim, by whose Himmah we are here tonight, praising him and glorifying Allah,  subhanahu wa ta’ala, and exemplified by Sayyidina Shaykh Abdalqadir as-Sufi, who drew the good people of Botswana to him by their love of Allah and likewise brought our brothers here tonight for nothing other than this gathering. This is Himmah, may Allah increase us in it and grant us a Himmah that will carry us to His presence, before we are forced to it.