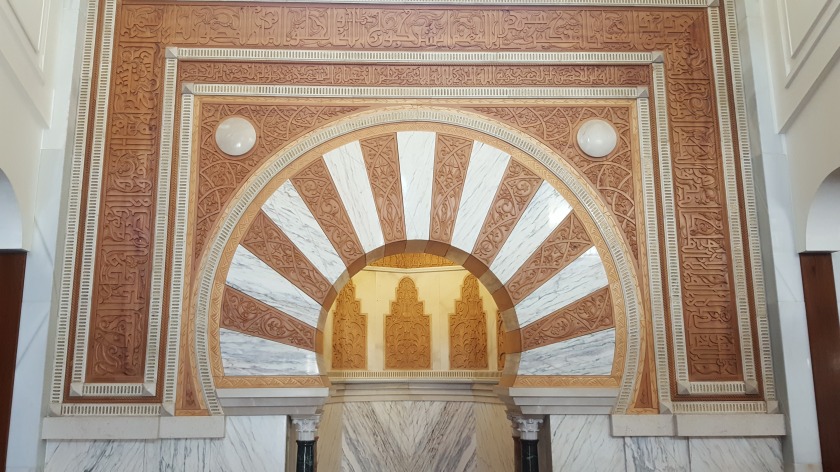 The Muslim and the mosque. A man and a building. A man who submits to his Creator and a building where he submits. The primary act of the Muslim, and therefore the human being, is to prostrate to his Lord. It is the time and position when man is closest to the Merciful and his own reality. Among men there are those who accept this and those who reject it. Both reside in the same world, but in a very different manner. The Muslim has a book and an example and strives to live his life according to both, which are in fact one. The kafir, the one who puts a layer between himself and the truth, thinks he knows better, or rather does not want to follow the available guidance, preferring his own opinion. Naturally, there is a bit of both in each, but generally submission or rebellion predominates one or the other. Allah tests each with the other; the Muslim’s Iman and the kafir’s rejection.

The mosque, the place of gathering to prostrate, is that place where only the Muslim goes to fulfil that obligation. When he steps into the mosque he steps out of this world, which is one of the reasons why worldly chatter is disliked within its walls. The Rasulullah, , said that Salat, the prayer, is the Mir’aj, the ascent of the Muslim, the leaving of this world for the heavens. The original journey taken by the Rasul from Makkah to Jerusalem and then up through the seven heavens, and at the point closest to his Lord that any being, man, jinn or angel came or will come, was when the prayer was given to us as a gift. The Mir’aj of the Rasul, was where and when he was given everything and completely satisfied by Allah and at the same time given the Salat for his Ummah, the foundation of all good acts for the human race.

This act of Salat in the mosque is the foundation of any Muslim community. The first thing the Rasulullah did, when he finally arrived in Madinah al-Munawwarah, that is, the place where the Deen was first established, was to site where the mosque would be built, followed by the market. A Muslim community revolves around the men coming together from whatever they are doing elsewhere and prostrating to Allah. Man is capable of so much evil and destruction that it is necessary that he is anchored in his slavery to Allah, and prayer in the mosque is the cornerstone of a just and merciful society. Without it a soldier may commit genocide, a trader cheat and ruin others, a leader may be corrupted by the trader and punish the poor and families will be abused and neglected. With it the hearts are softened and the other is considered.

The Muslim in the mosque fulfilling his obligation daily with sincerity and submission to Allah, puts the world in order, because Allah will protect him and others from his base self and will generate compassion and probity. Allah, says, ba’ad aoudhu billahi minash shaytanir rajim,

Certainly Salat prohibits lewdness and badness and dhikrullah is greater

Traditionally the mosque was always next to the market place, this world and the next side-by-side. When the Muslim left the mosque, the place which has nothing to do with worldly existence, he immediately enters the hustle and bustle of the world which only relates to the needs and desires of daily existence. It is the movement between the two and what is taken from one to the other that shapes the Muslim and his community. Does he leave the world behind when he enters the mosque or does he contaminate his prayer with unrelated anxieties and desires? Does he take the serenity and clarity from his Salat into his worldly transactions and thereby bring justice and compassion? Obviously it is a reminder and a struggle, otherwise why pray five times daily. In explaining the prayer, the Rasulullah, likened them to washing in a river five times a day, asking would a man remain dirty after doing that? Alongside that he mentioned that the prayer of Jama’ah in the mosque was twenty-seven times greater than other than it. This is to indicate and emphasise that those five prayers behind the imam in the community mosque have far greater impact than prayer alone or in another place.

‘Allah loves those who fight in His Way in ranks like well-built walls.’

An echo of the ranks of Salat, where the Imam calls for the closing of the gaps, the exclusion of Shaytan and the divisions between men. This is critical for a community; that men are united by love of Allah and His Rasul in social interaction, emanating from the mosque into the market place, so that a man’s submission to Allah is not compromised by obedience to masters not following Allah’s laws. A Muslim should be free to pray any of the five obligatory prayers in the mosque, which is still possible in these dark times. The Muslim these days is not prevented from prayer in Jama’ah other than by his own arrangement of his affairs and his acceptance of the separations created by modern life. There is no virtual prayer as there is no virtual friendship. Everything that is rapidly emerging in modern society separates people. The nature of our existence is necessarily struggle; it is how Allah tests us to see who is who. Modern technology is trying to make everything easy and convenient and if you accept that then you will struggle elsewhere, you won’t avoid struggle, you will just move it to another arena and it will be more difficult to overcome. You will drain at the same rate as your phone battery and you will not have the energy to get out and engage. Jama’ah of the Muslims turned to Allah in the mosque is a remedy and antidote. This is not a good option but a necessity as the kafir world, that we are a part of is decomposing, degenerating at an incredible speed, aided by technology. It is a corpse almost pure compost, excellent for new growth and the only fruit worth planting is Islam, personified by the Muslim shoulder-to-shoulder facing his Lord. Allah does not need our programmes, plans or projects; all He, requires is our obedience, our sincere submission to his laws and we will see new life emerge from within us, clarity of purpose and the understanding of ‘La Howla wa la Quwwata ila billah.’

Any mosque is part of a vast network of mosques all connected by a single qiblah. All the time around the globe jama’aat are established rippling out from the House of Allah in Makkah al-Mukarramah. Whatever the size of any community, be it a rural mud shelter in Mali or a vast Sinan edifice, it is part of that network of worshippers that never ceases to worship their Creator. A man may travel from mosque to mosque in far-flung places and always feel welcome and with a right to be there.

However, a mosque is not just any building even if it is called a mosque, because Allah warns us that there are those built on the edge of the Fire. Part of the definition of a mosque is that it is built on Taqwa of Allah from the very beginning, so the Muslims who build it must fear Allah and have no ulterior motives other than Allah’s pleasure and facilitating His worship by their Muslim brothers and understanding that sole ownership belongs to Allah. As the mother of all mosques is the baytullah, so are all mosques the houses of Allah.

While there are other structures specialising in study and dhikrullah such as madrassas and zawiyyahs, the mosque is also a place of learning, perhaps on a more general and fundamental basis. The great Imams had their places and students set up in the mosque and this practice continues to this day.

The mosque is necessarily a male environment owing to their obligation to attend the jama’ah, whereas women, who have no such obligation, may attend to learn and worship with the men. It is disliked that children, who also have no obligation, distract and disrupt the concentration needed to fulfil the rites imposed upon men. I have noticed in many mosques that this understanding has been weakened, probably owing to the influence of an emasculated modern view of the world, but it is particularly important around Salat and the Jumu’ah khutbah. The Jumu’ah IS listening to Imam; we are not even allowed to quieten someone who is making noise, so important is it to hear what the Imam is calling us to. It is totally natural for a child to seek attention, run around, squeal with delight, but it is incompatible with concentration on what is being said. It doesn’t seem right that a man should be babysitting his children, when he has a far greater obligation to obey Allah. As I mentioned earlier a Muslim should be free to pray in the mosque, a means of turning away from this world to his Lord and the Next world.

Allah has made man his Khalif in this world. He, has given man a responsibility, which he will be answerable for. With that burden, He has sent messengers with all the details and demonstration of what He requires from us while we are here, and owing to the onerousness of the task, the rewards are high, but because of the importance of it, the ignoring of the command leads to a heavy price.

The Muslim in the mosque lays the foundation for mercy, justice and Allah’s pleasure. Allah give us the desire, strength and steadfastness to do our job.